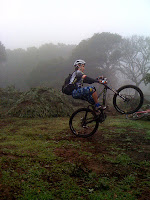 There are a few places in the local ride arsenal that quickly reveal one’s technical skills – or lack thereof, in my case. Rockville Park is definitely one of them. Especially when you add 98% average humidity and temps barely brushing 40, creating a dank foggy blanket of misty wetness that coats every rock and root with snot-like slipperiness.

Five of us convened for early morning service at the Church of Rotating Mass on Sunday. We tithed our donation to the Gods of Rockville and hit the trails. The nice level warm-up lasted next to nothing and the push uphill was on. Gasping like a lungfish, I kept reminding myself that every hill here is short. But I mustn’t have been paying much attention because my suffering didn’t abate. So I hereby blame the Holidays for the demise of the puny shred of fitness I was grasping onto – now withered into a leathery and incompliant strip of jerky, ready to be stretched, pushed and molded back into something that resembles a cyclist and not a wheezing old codger. I’ve got some work ahead of me… 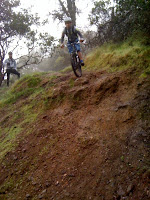 Once we got to the top the spectacular view was – nonexistent. Maybe 50 yards at best. The mist swirled and coated eyelashes and fogged glasses. But it didn’t dampen the fun. With an eager (and quite capable) Rockville virgin in our midst we laced together a series of trails that induced big grins and a few sphincter-puckering moments. Gravity bit a couple of us more than once and a small blood donation was made to appease the carnivorous spirits that keep watch over this very cool gem from the Pliocene era. As for my dreadful technical skills, the more we rode the looser I got, so towards the end of the ride I was actually not ploughing into rocks and trees, but dancing over and weaving around them. It was encouraging, to say the least…

Just before we got back down to the lot where our cars awaited, we found a sweet jump with a nice run-in and mellow landing slope that provided excellent elevation and distance. Whooping and hollering like kids, we hit the jump several times before we called it a day and rolled back to the entrance of this small (635 acres) park, but laced with a sweet network of trails of varying difficulty that can keep all but the most cynical cyclist happy for hours. Cheers to Alex, Chris, Darin and Steve who thumbed their noses at the less than stellar conditions and made it out for a sweet ride. Which begs the question: when are we hitting Rockville again?
Posted by We Are Pegasus Bicycle Works at 11:15 AM No comments:

We’re a progressive, fun-loving bike shop that’s family-owned and operated by avid cyclists. Our goal is simple: we’re here to help you get the most enjoyment and performance from cycling by helping you choose the right bike and accessories, and by providing the best service and most knowledgeable information to each and every customer. 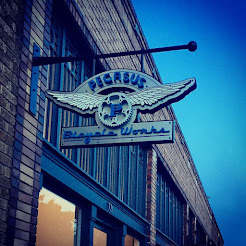